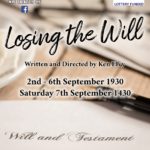 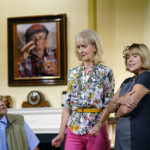 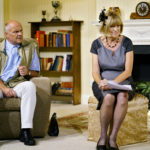 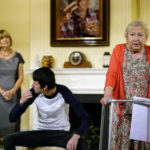 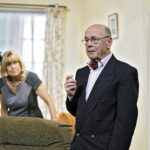 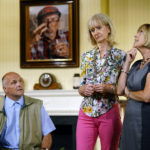 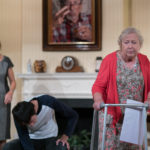 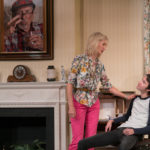 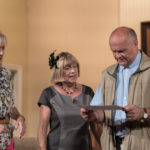 Following Jack Selby’s sudden and unexpected death, his solicitor – Mr Fothergill – summons Jack’s son – Nigel – and daughter – Pippa – with their respective partners to Jack’s Holland Park flat. They assume this is to confirm the contents of their father’s Will, which names them as his sole beneficiaries. But Fothergill reveals Jack was about to remarry a much younger woman – Daisy – and had written a new Will, possibly leaving everything to her.

Fothergill does not know the whereabouts of this new Will and intimates that if Nigel and Pippa want their father’s considerable fortune, they need to find it before Daisy does – and destroy it.

Welcome once again to our theatre. It is lovely to see you here. I know I am speaking to the converted, but you may not realize that you can have an active part in our group by inviting your friends to make up a party to watch our plays or recommending that they come on their own and see us.

If you come on the Monday of the show you can get a group discount (minimum 10 people) and if you care to bring your children/grandchildren (under the age of 16) they can come in at half price on the Saturday Matinee. So, lots of things to think about.

‘Losing the Will’ is my thank you to the Salterton Drama Club for making me feel so welcome when I joined. I have tried to write something that makes good use of our wonderfully intimate Playhouse; that our enthusiastic, dedicated Club members enjoy presenting; and that you, our loyal and appreciative audience, enjoy watching. The outcome has relied on the usual great team effort. I couldn’t have asked for a better cast, which includes some very familiar faces as well as some exciting less experienced talent. In creating their characters, they have brought this new play to life. And, I could not be more grateful for the tremendous support given behind the scenes. Designing, building and dressing the – as always – impressive set; designing and operating the lighting and sound; and fulfilling all the vital backstage roles, including stage management, providing props and costumes and taking on the – hopefully redundant! – job of prompt. Then there are our ever-cheerful front of house team; our unflappable and infallible Treasurer; and our photographer, who contrives, somehow, to catch our best side (whether we have one or not). So, on behalf of our entire team, may I welcome you to this performance and, again, we really hope you enjoy it.

Hello and welcome back to the Salterton Drama Club!

We hope you have all enjoyed the Summer as we have, although as usual, work never stops here at the playhouse!

This is a very exciting production to be bringing to our audiences, as it is an original script, the first original full length play we have had for a long time, and it has been written by our very own Ken Elvy.

Ken joined the group around 18 months ago and spent the best part of a year ‘observing’ us in order to write this very funny play. This was a little unnerving and made us wonder who the characters took inspiration from in real life! However as the script was so entertaining, we thought we should bring it to the stage regardless. For those of you who know us well I will be interested to know who you think the characters are!

Ken has done a fantastic job at directing, as I’m sure you will see in today’s performance.

He has an extremely experienced group of actors on the stage, many of whom you will know well and have enjoyed themselves immensely during rehearsals.

Of course we cannot forget to mention the set, constructed by Richard and his team, and thank you to everyone who has helped back stage and in the theatre.

Before we kick off, I would like to remind you once again that we are part of the Coop Community Fund, only until October this year. If you select us as your cause for your membership points, we will be able to continue to improve our wonderful playhouse for you.

There is nothing left to say but – enjoy the show!